University of Iowa researchers are analyzing the potential of using Photodynamic Therapy (PDT) – a type of cancer treatment technology that uses light and photosensitizing agents – to treat soft tissue sarcoma.

“I think the exciting aspect of PDT for sarcoma is that it has not been investigated extensively by other researchers and physicians in the field,” said Fatima Toor, an Iowa Technology Institute faculty affiliate and associate professor of electrical and computer engineering and of physics and astronomy.

Toor directs the Toor Lab, working in the field of photonics at the interface of optical engineering, materials engineering, quantum physics, and electromagnetics. She collaborated on this paper with Carver College of Medicine researchers in the Departments of Internal Medicine, Pathology, Orthopedic Surgery, and Radiation Oncology.

Dr. Varun Monga, a contributor to the paper, is a clinical assistant professor and medical oncologist at the University of Iowa Hospitals and Clinics’ (UIHC’s) Holden Comprehensive Cancer Center. His work focuses on the treatment of sarcomas both in research and in clinical practice.

“These cancers are considered rare and are difficult to treat, and novel treatments are desperately needed,” Dr. Monga said referring to sarcomas. “The biggest challenge with photodynamic therapy has been the delivery of light of a particular wavelength to internal organs and anatomical structures, which is how I got connected with Dr. Toor to collaborate on this project.”

Soft tissue sarcoma is a rare type of cancer found just below the skin and has an overall five-year survival rate of 65%, which drops to 16% with the presence of metastasis, or spread of cancer cells, at diagnosis.

The paper also discusses an additional mechanism of inhibiting the Hippo Pathway, a signaling pathway which controls organ size, using the same photosensitizing drug, Verteporfin, to halt the spread and growth of sarcoma. Verteporfin has been shown to inhibit the growth of new blood vessels in tumors (angiogenesis) during multiple preclinical trials conducted by Dr. Munir R. Tanas, a co-author of the paper and associate professor at the Carver College of Medicine, Department of Pathology. Dr. Tanas's lab focuses specifically on understanding and targeting the Hippo Pathway in the treatment of sarcomas. 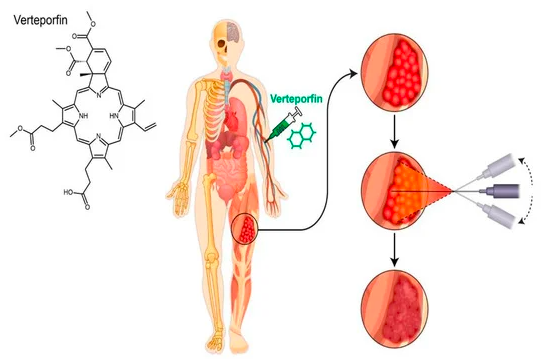 Dr. Monga says that a team of physician scientists and researchers at UIHC, led by him, are working on exploring and understanding the mechanism by which non-photoactivated Verteporfin may be used to exploit a dual action treatment of sarcomas.

Various light sources can be used in PDT depending on the photosensitizer injected, disease characteristics, and cost efficiency. LEDs and lasers at visible wavelengths (630 nm and 690nm) are generally used for PDT. Implantable devices for light delivery may be a solution, the paper outlines.

“I am certainly very interested in developing implantable light delivery devices for PDT that are wirelessly powered,” Toor said. “My team is actively researching the literature on the state-of-the-science and will plan on exploring these devices as a research direction between our research group. The road is long for the implants to make it to the clinic since there are several challenges that will need to be addressed.”

“If found to be successful, then we will take this [PDT] further into early phase clinical trials in patients with sarcoma,” Dr. Monga said. “Successful delivery of light at a specific wavelength into the deep anatomical structures, such as the muscles and bones, from which the sarcomas originate, would be the key discovery. The next challenge would be to determine its effectiveness, with photosensitizers, in helping to secure negative pathological margins following the primary surgical resection of the sarcomas which will be studied in clinical trials.”