This article appeared in the 2022 edition of Iowa Engineer magazine. View the full magazine here. 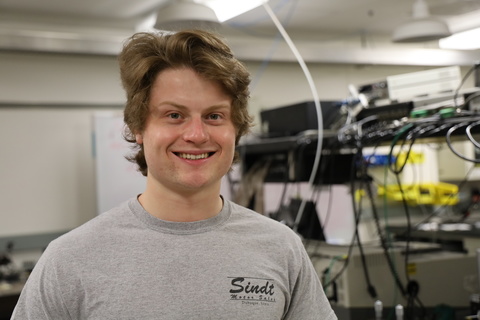 A fascination with electronic devices and photonics – or the science of light – has led Jacob Sindt down a promising path of research and discovery as an undergraduate student at the University of Iowa College of Engineering.

“From growing up in Iowa, I had always dreamed of becoming a Hawkeye and joining a Big 10 school,” the UI junior from Dubuque said. “My older brothers also played a big role in this decision as two of them also became Hawkeyes.”

Sindt is majoring in electrical engineering and works as an undergraduate research assistant at the Iowa Technology Institute where he gets hands-on experience under the mentorship of Fatima Toor, the Lowell Battershell Chair of Laser Engineering.

He captured his research in a poster that received a perfect score in the 2021 Fall Undergraduate Research Festival. Judges noted “the presenter could be a graduate student,” he had great visuals, clear goals and outcomes, and could clearly communicate his research.

“I attribute this accomplishment to my research mentor, Fatima Toor,” Sindt said. “Without her insightful eye over my work and her dedication to the research field, I would not have the dedication and appreciation towards conducting research that I have today.”

Sindt’s successes were recognized in his inclusion in UI’s most recent banner campaign highlighting student standouts. Sindt’s banner is on display in the downtown Iowa City pedestrian mall.

“I was thrilled to have not only my research, but the research of my peers be displayed for all students to see,” Sindt said. “This moment also made me think about the people who helped me get to where I am today, and I am truly thankful for their dedication.”

“He has been an outstanding researcher in our lab and plans to attend graduate school for pursuing a PhD degree,” Toor said. “I certainly expect great things from him as a future researcher and engineer.”