The 7th International Digital Human Modeling Symposium and the Iowa Virtual Human Summit 2022 will be hosted in Iowa City, Iowa, located in the Midwestern United States. It will be a hybrid event with a virtual option for those who cannot attend in person.

For those attending in person, the event will be held at the historic Iowa Memorial Union (IMU), Second Floor Ballroom. Presentations and exhibitors will be held in the ballroom, and two additional breakout rooms will be available for working or meetings.

The IMU has a coffee shop and two cafeterias, and ample open space for networking. 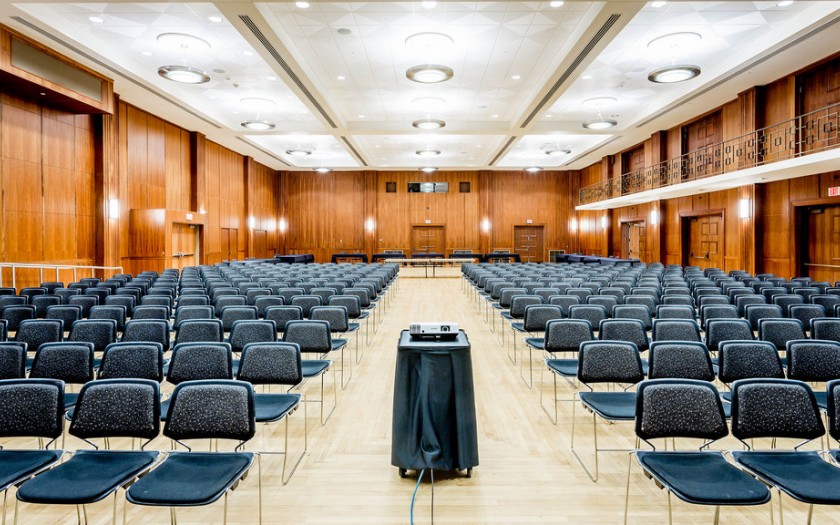 The University of Iowa is one of America's premier public research universities. Founded in 1847, it is the state's oldest institution of higher education and enrolls 31,730 students, as of fall 2020.

A member of the Association of American Universities since 1909 and the Big Ten Conference since 1899, the University of Iowa is home to one of the most acclaimed academic medical centers in the country, as well as globally recognized leadership in the study and craft of writing. Iowa is known for excellence in both the arts and sciences, offering world-class undergraduate, graduate, and professional academic programs in a wide variety of fields.

Home to the University of Iowa, a vibrant downtown district, and dozens of recreation opportunities, Iowa City is known as a center for education, arts, and entertainment. As a cultural oasis in the state, visitors will find high-end dining, appearances from notable speakers and acts, top-level collegiate sports, and a bustling university atmosphere that attracts people from across the region. UNESCO has designated Iowa City a City of Literature due to its rich history in promoting and influencing the written word. High-level research facilities and the expansive University of Iowa Hospitals and Clinics system, which offers world-class health care, reveal a dedication to science and medicine. In addition, Iowa City is situated along the Iowa River, offering access to unique outdoor activities and areas.

Founded in 1839, Iowa City served as the state's capital from 1841 to 1857, when the center of government was moved to Des Moines. Iowa City has a population of around 75,000 people and is located in the eastern part of the state, just a 30-minute drive from Iowa’s second-largest city, Cedar Rapids. The Iowa River runs through the center of the city and campus. Along the river’s eastern banks, university halls and buildings ascend the hill and converge with the downtown district. Spanning eastward from the city center are neighborhoods filled with historic homes and student living, easily accessible by foot, bicycle, and public transit. The University of Iowa Hospitals and Clinics' main campus, the historic Kinnick Stadium and other athletics facilities, student residence halls, and art buildings, including Hancher Auditorium, blanket the area near the western riverbank, extending into the neighboring municipalities of University Heights and Coralville.

The Iowa City–Cedar Rapids region is ever expanding in business and industrial opportunities. With headquarters and satellite locations of major engineering and aerospace companies, including Collins Aerospace, it is an area for innovation and collaboration.